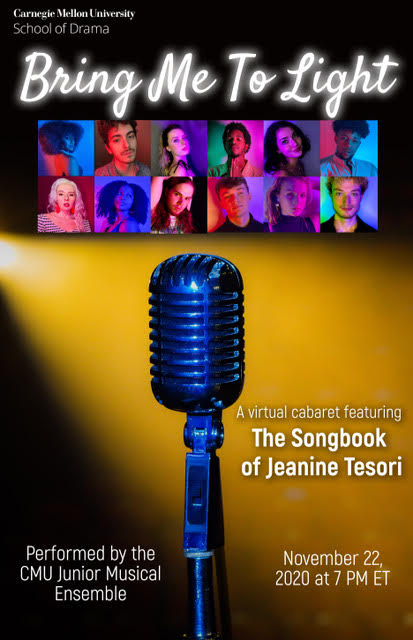 Bring Me to Light
This event has passed.

Please contact the Box Office at 412-268-2407 if you wish to register before this evening’s performance.

For the first time ever, the CMU Junior Musical Ensemble will virtually present its fall Cabaret online. Traditionally held in downtown Pittsburgh’s CLO Cabaret, the annual performance has become a sought after and sold-out event.  Now you can register for admission and viewing from the comfort of your own space.

Not only will the audience be joining us from around the world – but so will the performers! Our ensemble will be performing from Egypt, Hawaii, California, and Pittsburgh for a night filled with the music of Jeanine Tesori – one of the best songwriters currently working in the musical theatre industry. 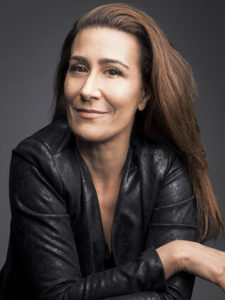 Jeanine Tesori has written a diverse catalog for Broadway, opera, film and television. Along with Missy Mazzoli, Ms. Tesori is one of the first female composers commissioned by the Metropolitan Opera. Her musicals include Fun Home (Tony Award, Pulitzer finalist); Soft Power (Pulitzer finalist); Caroline, or Change (Olivier Award); Violet; Shrek; Thoroughly Modern Millie; Twelfth Night; A Free Man of Color; and Mother Courage (starring Meryl Streep). Her operas include Blue (Libretto, Tazewell Thompson); A Blizzard on Marblehead Neck (Tony Kushner); The Lion, The Unicorn and Me (J.D. McClatchy); and the upcoming Grounded (George Brant). In addition to her work as a composer, she is the founding artistic director of New York City Center’s Encores! Off-Center Series; the founding creative director of A BroaderWay, an arts empowerment program for young women; and a lecturer at Yale University.

All Cabaret proceeds benefit the School of Drama’s Senior Showcase, an annual spring event where graduating School of Drama students travel to New York and Los Angeles to present their work to industry professionals.