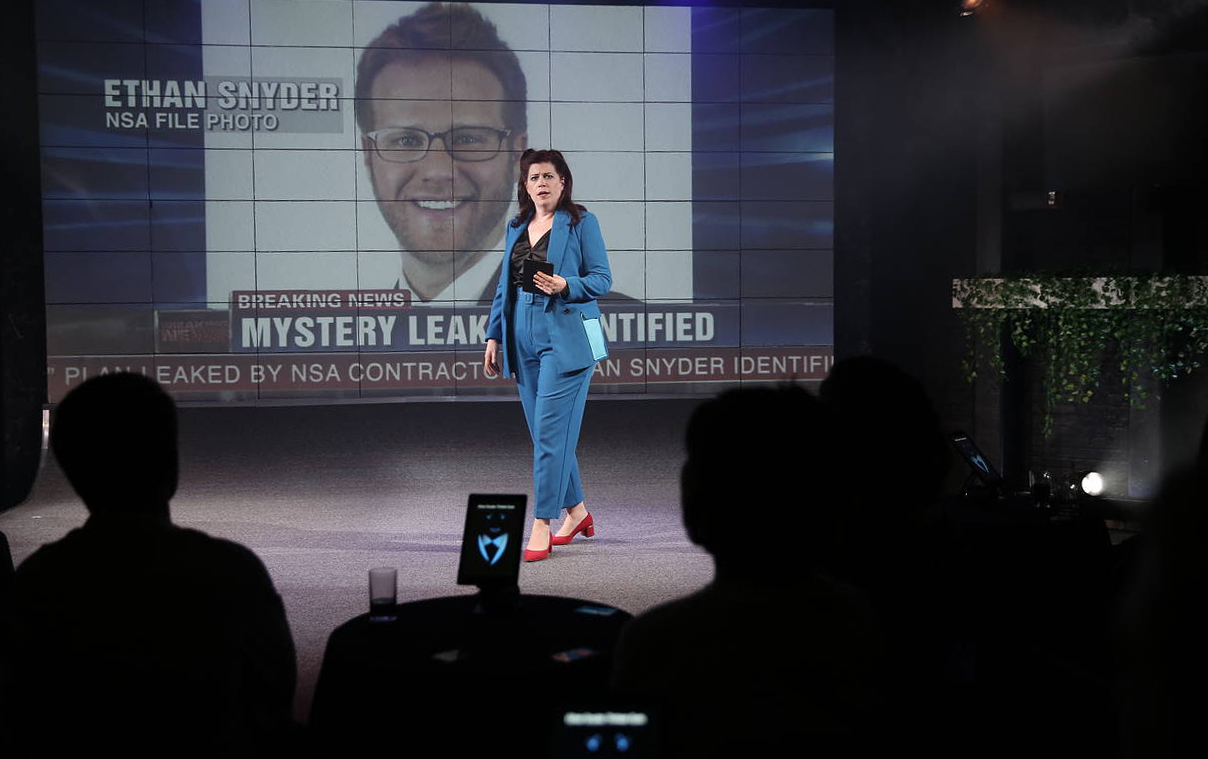 Librettist Rob Handel, CMU Professor of Dramatic Writing, and Composer Kamala Sankaram’s opera Looking at You, directed by Kristin Marting, made its world premiere at HERE Arts Center in New York this September.

Handel and Sankaram describe their work as “an immersive techno-noir opera.” The show begins as a corporate tech party and audience members are guests, invited to punch in “employee numbers” to tablets at their cabaret-style tables and receive free drinks.

The beep and synth of electronic dance music pulsates throughout the show, drawing attention to the tech industry’s relentless optimism. But the upbeat energy grows sinister when a whistle-blower leaks classified documents revealing that 13 governments are in cahoots with tech to amass data on everything we do.

Looking at You grows out of a wealth of political and cultural allusions, including Edward Snowden, the Facebook–Cambridge Analytica data scandal, and Casablanca. “It smushes,” says Handel. “It smushes operatic voices with electronic dance music and crime jazz. It smushes Casablanca with Edward Snowden. It smushes surveillance Capitalism with high romance.”

The threat of capitalist-driven data mining is far from abstract: Heidi Waleson of The Wall Street Journal reported that about halfway through the show, her table tablet began displaying images from her personal Facebook page.

Reviewers have embraced Looking at You. Waleson writes, “It’s a serious issue, but the creators avoid didacticism, instead skillfully deploying suspense and humor in their storytelling.”

Abigail Weil of The Theater Times also praises the show’s infusion of fun into menace, writing, “Looking at You is the most fun I’ve ever had while being scolded for my vanity and indifference.”

What’s so creepy about this show, and our lives, is that there is no single villain, but a faceless network. “As the show emphasizes dramatically, it comes back to the fact that your data is not distributed by people; it’s distributed by computer programs,” says Handel.

But Handel’s Libretto presents peril cloaked in the polished symmetry of art. “I think Kamala and I collaborate so successfully,” he says, “because both of us like to occupy the splash zone where the elegant pattern-making of art meets the political forces of subversion and disorder.”