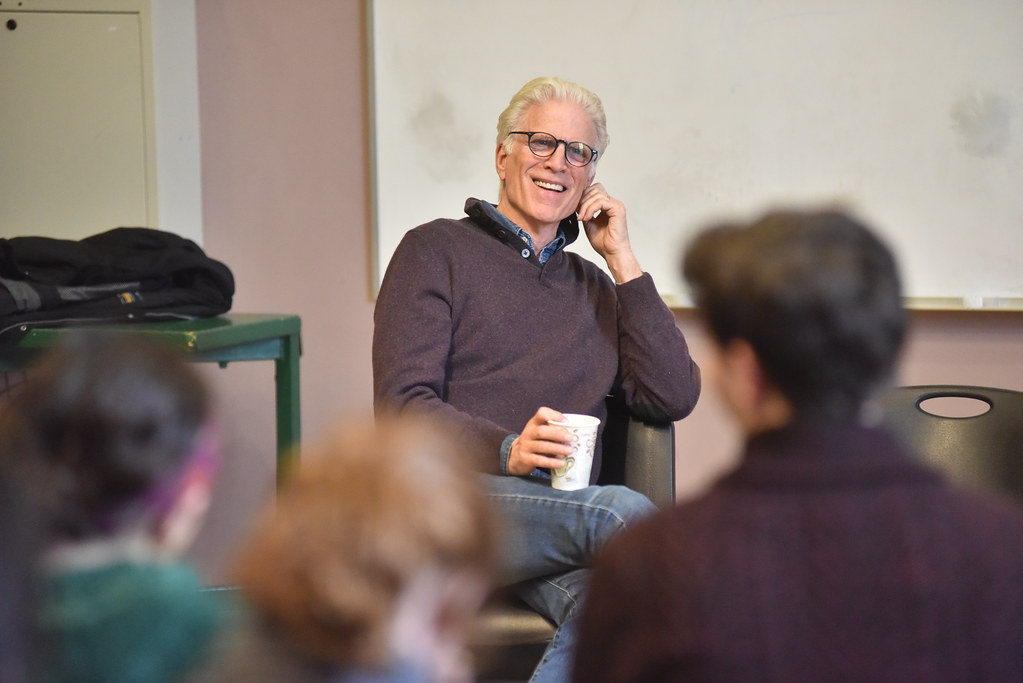 After almost 50 years in the entertainment industry, it may seem hard to believe that actor Ted Danson needs to find inspiration for his craft. But that’s exactly what he was looking for — and found — when he returned to Carnegie Mellon’s School of Drama, his alma mater, for a visit with sophomore acting students Feb. 7.

The 72-year-old award-winning actor, in town with his wife, actress Mary Steenburgen, talked with students in the Purnell Center about his career path, offering advice and answering questions. He then turned the tables with some questions of his own.

After almost two hours, he exhaled, clapped his hands and told the class, “Thank you. I really needed this.”

“This” was inspiration from fellow actors — something he sought as he wrapped his current hit sitcom, “The Good Place,” and prepared for a new series about the mayor of Los Angeles. In the Tina Fey-created series, the pilot for which he just finished, he will co-star with fellow CMU alum Holly Hunter.

“It makes me feel like he did need us,” he said. “He needed us to ground him. I’m sure that’s hard when you are Ted Danson.”

“So, enough about me,” Danson said after talking about his undergraduate years as a political science major at Stanford University and his transfer to Carnegie Tech in 1968, “now, let’s talk about you. I want to hear what’s on your mind.”For the next hour, he listened to their hopes and aspirations, sharing stories of his own along the way and offering encouragement to the fledgling actors.

“Listen, I am as freaked out at the beginning of every new job as you will be, and that’s a good thing,” he said. “It’s OK to start at zero every time. It means you are creating something new and not recreating what you’ve already done.”

Musumeci-McGinn found the conversation to be one of the many thoroughly insightful, honest, awe-inspiring conversations students get to have with alumni who are kind enough to visit.

“They each have perspectives we benefit so much from learning about before going out into the industry,” the 19-year-old said. “I was particularly impressed with his warmth and groundedness, and his ability to connect with us.”

When Danson graduated in 1972, he left Carnegie Mellon and headed to New York, where he worked briefly in the theater before heading to the West Coast. He soon landed his iconic role as Sam Malone in “Cheers” and became a household name.

He said he learned at CMU some basic principles that have served him well throughout his career: “Say thank you. Be grateful. Make people feel good about themselves, and be joyful while you do it.”

Self-deprecating at times, Danson said he reminds himself to stay positive in a business that can be tough. He told students or, as he called them, his” fellow actors,” to stay in the game if it’s what they really want.

“You are what you have to offer the world,” he said. “You need to remember that you are good enough. Take your work seriously, not yourself.”