How does one know they want to become a visual artist? For Nica Ross, it was playing the trumpet in their high school jazz program. Although jazz is an inspiration for many artists, it wasn’t the music itself that ignited their passion, but the A/V closet that was within eyesight of their rehearsals.

“The A/V room was used for the live broadcasts of the performances. My teacher, Mr.Warwick saw I had my eye on the equipment and gave me the key to the AV closet. I was self taught. That made me feel confident at a young age.”

Nica began to learn how to edit on computers before popular editing software like Final Cut Pro made the process more accessible. “Other students would hire me to help make videos for their assignments. They’d pay me in bookstore gift certificates.”

After graduating with a BA in Cinema from San Francisco State University, Nica began collaborating with bay area artists to incorporate visual media and cameras into live performances. The process of working with other artists and learning through creating is what got Nica to start thinking about the benefits of graduate school.

Nica focused on projection, performance, and installation while obtaining their MFA in Advanced Photographic Study from The International Center of Photography – Bard College program. After graduate school, Nica used their skills to assist with live work and met with video designers working in theater.

Caden Manson, previous head of the John Wells Directing Program, introduced Nica to Brooklyn based media and theater group 3-Legged Dog (3LD), where they landed a job as a production manager. While at 3LD, Nica worked on a large-scale immersive video design for the brand launch of fashion company Michael Kors in Shanghai, China. 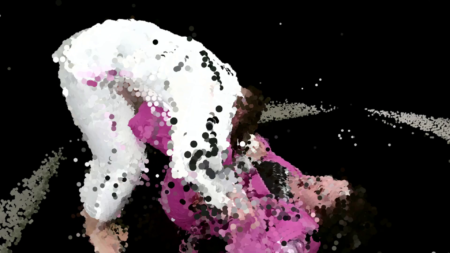 “There are a million versions of pursuing visual media at CMU. You learn how to use projectors and get your work on it. Foster a strength in finding your approach. Collaborate with theater makers and designers, analyze scripts. There is flexibility to learn coding at the computer science school. We have incredible illustrators who work with Maya animation…alumni even come back and do guest workshops.”
Image: VR essay “Permanent Visibility” that was captured in the Panoptic Dome at CMU.

Nica’s body of work is proof that there are many career paths for a visual artist. “At CMU, many alumni have gone on to produce work in gaming, regional theaters, teach as professors, work with pyrotechnics at Disney, and even work for disguise.” An industry-leading platform for creatives and technologists to imagine, create and deliver visual experiences, disguise’s software, Designer, is taught at the School of Drama’s Video Media and Design program.”

So what ultimately led Nica Ross to become a faculty member at CMU? After seeing a production of “Lord of the Flies”, directed by Caden Manson, Nica knew they wanted to be a part of the CMU School of Drama. “The production quality was great. It was media intensive. I was impressed.”

Since joining the School of Drama, Nica’s teaching approach continues to evolve as the tech used in visual media design advances. They make sure to understand each student’s passion and interest to bring that work into the room, or during these times, into Zoom. They focus on emphasizing a critical approach to making work and utilizing technology within a broader socio-economic context. “Choices matter,” said Nica, “we need to ask why.”