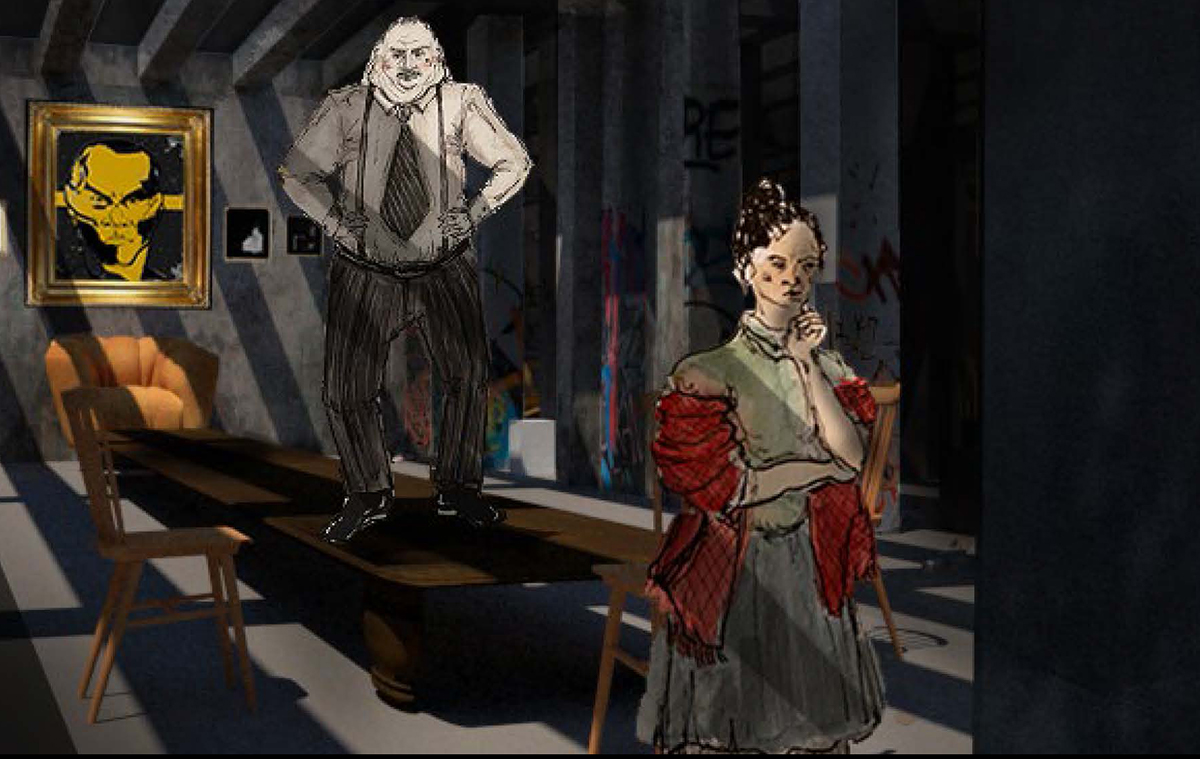 The goal of the PQ Studio’s Common Design Project is to offer students who may have found their creative projects cancelled, a chance to find artistic inspiration through a play that eerily anticipated – over eighty years ago – many of the dangers the world is facing today.

Written in 1937, Karel Čapek’s play The White Plague finds a dictator-led country at war in the midst of a deadly pandemic. A doctor has found the cure, but he is resolved to aid only the poor until the war ceases.

To connect to the play, Ms. Rosen said group conversations always returned to the subject of their roles as women in a country that was founded on the pillars of patriarchy. So they decided to approach the design from the perspective of the women in the play, to investigate what it means as they witness a patriarchal society deal with crisis.

Exploring the opposition of masculinity vs. femininity, an immersive experience that takes advantage of Studio 201’s interior columns transformed to a brutalist aesthetic was conceived. Led by the women in the play, an audience limited to 9 would navigate through a world where the women care for everyone, even the audience, as they bring life, color and wisdom to the desolate world of the plague. The men in the play don neutral colors and prosthetic masks to exaggerate the features that represent their toxic masculinity.

PQ Studio: Common Design Project Special Edition invited an international community of design for performance courses to set The White Plague as a studio design project (conceived for any type of theatre, whether traditional proscenium, small and immersive spaces, found space projects, etc.) that encourages students and emerging designers to explore the text through their lens, and to consider approaches meaningful to a contemporary audience.

Thirty-eight schools from around the world answered the call. Carnegie Mellon University’s School of Drama was one of 12 selected for gallery inclusion and critique. The school joins The Royal Welsh College of Music & Drama, Toi Whakaari, NZ Drama School, and the Academy of Fine Arts in Warsaw, among others, chosen by the PQ Studio’s jury.

The Prague Quadrennial of Performance Design and Space was established in 1967 to bring the best of design for performance, scenography, and theatre architecture to the front line of cultural activities to be experienced by professional and emerging artists as well as the general public.

The Prague Quadrennial is organized and funded by the Ministry of Culture of the Czech Republic and realized by the Arts and Theatre Institute.