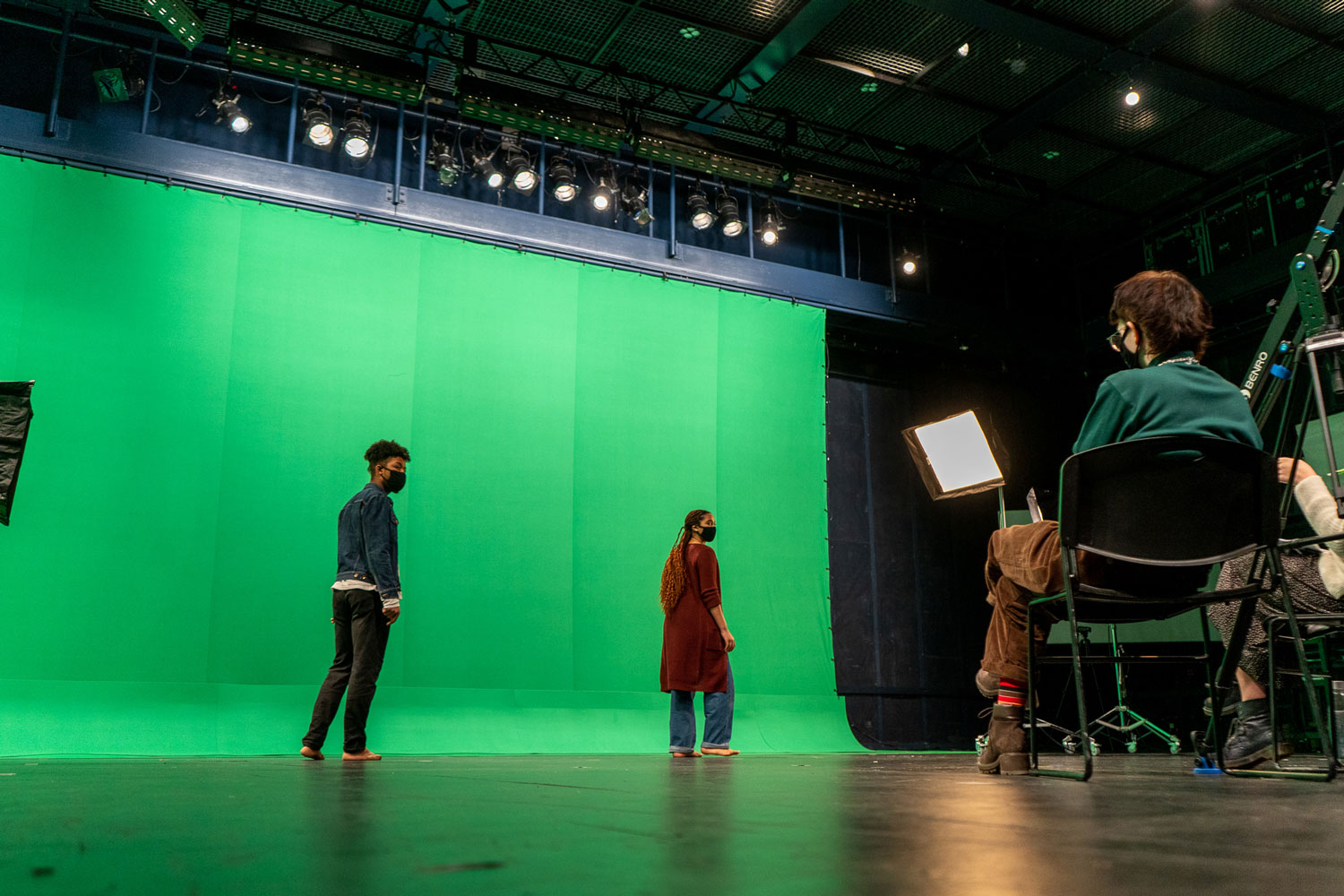 How was The Beach streamed?

We used and rehearsed on Streamyard! Streamyard has a lot more flexibility and opportunity for aesthetic choices than Zoom, but still isn’t quite built for theater. Fun fact: Streamyard doesn’t have an option to mirror video, so the actors actually had to do all of the blocking backwards! Big props to them for making it work! For performances, Allison Gerecke (our stage manager) would operate the StreamYard while calling cues via phone call to Jem Tepe (our run crew) who’d run them on QLab.

As a director, what element of the story did you connect with?

When I first heard Kate read the play, I was utterly enchanted by the whimsy and magical world. It made me feel like a kid again. From the beginning, I’ve loved how the lightness and imagination of the world allows us to have serious conversations about grief while still taking care of the audience and actors.

Knowing your audience would be watching on screen, how did you prepare actors for not having that feedback?

We actually only ever ran the show with the actors’ mics unmuted, so we tried not to get used to any live audience feedback. This prepared the cast to trust in themselves and their ensemble to carry the story across. We focused a lot on pacing—how do you keep a story moving forward with urgency when we miss that rush of energy and adrenaline that a live audience gives us? Another big question for us was how to keep audiences invested and listening, even to their screens. We experimented a lot with that, from trying more traditional staging with actors further back from the camera to eventually moving everything closer down so we saw actors’ faces more clearly (thank you to our advisor Justin Lucero for the suggestion!). This helped those of us watching to connect to the story, but it also helped the actors to connect to one another. Since the actors also had to watch each other on screen, as opposed to working together in person and having the show filmed, the actors had to work doubly hard to feel their scene partner(s). I’m still blown away by the level of connection they’re able to achieve, even in their own homes and with roommates right next door!

Similarly, how was the approach to design influenced?

We knew from the outset that we had a tricky situation given the dreaminess of our play’s world. How could we get an audience to stay with us as we go from a normal beach to an entirely vertical ocean where fish float upwards and eels lurk in dark corners? And how could we build the whimsy of this space in the actors’ homes? I wanted everyone—from the actors to the team to the audience—to viscerally feel the poeticism of the world. From the beginning, I was also interested in how we could embrace the uniqueness of this virtual medium to do things we wouldn’t be able to do otherwise. I also wanted Kate to have the opportunity to get to see the world she built come to life visually. This led me to the idea of integrating animation into the virtual experience of the play. I’m a huge fan of Hannah Kim’s animation work (CFA ’20, hannahkimart.com) and so the opportunity to use our resources to commission her was a total dream

Design sketch by Hannah Kim for THE BEACH

We initially started with the baseline goal of having an animation showing the normal ocean’s transition to vertical and then got increasingly excited and snowballed from there. Our brilliant lighting designer (and newly crowned Green Screen Guru) Xotchil Musser had the fantastic idea to use the School of Drama’s new green screen space to film the actors for this opening sequence so that we could merge the two forms together. And so began our work! From conceptual meetings with Hannah to screen tests to ultimately filming, we all got to learn about working with a green screen to marry animation with live action work for the first time. We also incorporated Hannah’s beautiful work as overlays, backgrounds, and videos on Streamyard to ground us in our different locations. This helped all of us on board root ourselves in the play’s world, and we hope that it does the same for audiences!

Xotchil and I also worked together to choose a backdrop that would give us both the aquatic feel while still letting us differentiate between places in the play. With many yards of cheap chiffon, Xotchil’s dynamic lighting design glowing against the fabric transported the actors out of their homes and onto the beach.

To give the show the childlike storybook quality (and to fill in moments we wouldn’t be able to visualize given the constraints of the medium) we integrated certain stage directions into the play as lines. Finally, we used simple puppets to capture the playfulness of the ocean creatures. Our crew member Jem Tepe built sock puppets with light up eyes to match our larger eel puppet (played by Khailah Johnson)!

Do you think streaming theater will be part of the future post-pandemic?

I absolutely think so and hope so given its accessibility. I think it’s beautiful how virtual work eliminates the location barrier and lets us collaborate from across the country and even the globe. I’m also moved by the breadth of people who can be a part of the audience. Because no plane tickets or anything like that was involved, my family and even high school teachers as well as friends and collaborators from across the country are able to see The Beach. How cool is that? Even when we move back to more in person work, I hope to see live streams of shows continue as well so we don’t lose this ability to share our work so widely.