Sheldon Epps: From Actor to Director to Writer.

Sheldon Epps found comfort in the theater from a young age. When he was 11, his family moved from an all-Black neighborhood in Los Angeles to a predominantly white and Jewish area of New Jersey – a culture shock to say the least. But when his mother would take him into New York City to see a Broadway musical, it was more than just an escape. It was a spark. He started saving his allowance to go into the city on his own to see theater – everything from classical Shakespeare to new plays – and soon, he found community in his new home when he joined the drama club at school. By the time he was a senior in high school, Sheldon’s desire to pursue a career in acting was cemented.

“My parents were surprisingly on board with that,” he said, “as long as I went to college.”

So, the search began. In deciding where to apply, Carnegie Mellon was presented as a dare by one of Sheldon’s classmates, who wagered he would never get in because so few were accepted. Sheldon not only took the dare, he won the bet and was admitted to the CMU School of Drama’s acting program.

“Hard as it was, the Carnegie training really did prepare me for, honestly, the rest of my life,” Sheldon said. “What I learned about the craft of acting, and the craft of theater overall, has been the backbone of everything that I’ve done, and continue to do.”

After completing his four years of training, Sheldon jumped right into life as a working actor, landing enough roles that he never had to have a “survival job” – something that pays the bills when the acting gigs do not. But even though the work was steady, Sheldon experienced frustration as a classically trained actor of color.

“At that time, I was still an anomaly,” he said, “and it was restrictive” in terms of the roles he was considered for.

His frustration was galvanizing. He teamed up with three fellow Carnegie Mellon graduates to form their own company in which they could produce the type of work that made them tick. They founded The Production Company in New York City, and it was there, at the urging of his CMU classmate and renowned director Norman René, that Sheldon first tried his hand at directing. Turns out, he had quite a knack for it.

Sheldon went on to direct at regional theaters across the U.S., in London, and on Broadway, as well as for film and television. He was hired as Associate Artistic Director at the Old Globe Theatre in San Diego, where he worked for four years before becoming Artistic Director at the Pasadena Playhouse. He spent two decades in that role, championing diversity on stage and off, and leading the Playhouse to become one of the most prominent regional theaters in the country. He stepped down in 2017.

According to Sheldon, writing a book had been on his mind since he left Pasadena Playhouse, but he didn’t actually sit down to start writing until spring of 2020 when the world shut down due to the pandemic and he “no longer had any excuse not to.”

Later that year, the murder of George Floyd ignited a rallying cry for racial justice across the country, and very specifically within the American theater. Sheldon’s personal experience throughout his career as “the first,” “the only,” or “one of the few” actors, directors, and leaders of color in the American theater gave him an acute lens on how racism has plagued the field. And he is quick to note that he feels privileged and fortunate to have a very rewarding career, yet the frustrations of racial inequities remain.

“When you hear about these frustrations and this anger,” he says, “it’s not necessarily from someone who is angry, or someone who feels deprived. I don’t feel deprived. I feel highly rewarded. But there are still stings and agitations that I have experienced. So, if I feel this way, I know how much others must feel it. And I want the field to know that.” 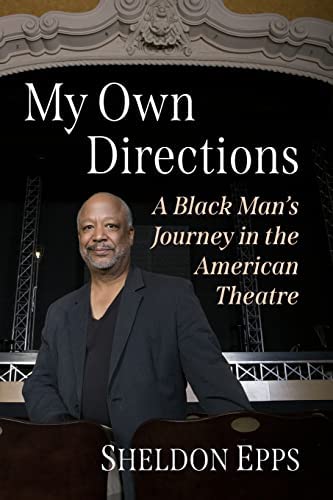 His memoir, “My Own Directions: A Black Man’s Journey in the American Theatre,” is out now, and it comes at a time of great reckoning for the industry. Theaters across the country are grappling with the ways systemic racism has, and continues to show up in their organizations. While leaders of color have been appointed at several major regional theaters over the past few years, they have not necessarily been set up with the resources or support needed to start turning the ship. Sheldon hopes that his book, his experiences, and his unique perspective on leading a major regional theater for 20 years will give insight and inspiration for real change.

Sheldon Epps recently visited Carnegie Mellon University, engaging with students and faculty in the School of Drama and the College of Fine Arts. Click here to read more about his history with CMU and his recent visit.

“My Own Directions: A Black Man’s Journey in the American Theatre” is available now at your favorite local bookstore, or on Amazon.

SHELDON AS A STUDENT...