Welcome, Robert Ramirez – New Head of the School of Drama

A New Chapter for CMU Drama

The School of Drama at Carnegie Mellon University embarks on a new chapter under the leadership of Robert Ramirez, who began his tenure as head of school on August 1. As the beginning of a new school year approaches, Ramirez has his sights set on getting to know the students, faculty, and staff, and working together to advance the school’s mission of excellent training while also creating a more equitable and sustainable learning environment.

Ramirez joins CMU from the Department of Theatre and Dance at the University of Texas at Austin (UT), where he served as professor and chair. During his tenure as chair, Ramirez prioritized student experience and learning outcomes, as well as the advancement of faculty and staff profiles in the College of Fine Arts and the professional realm. As a teacher and administrator, he set new standards for recruitment of diverse student, faculty and staff populations, as well as the development of equitable and inclusive casting and production processes and curriculum reform at the undergraduate and graduate levels.

Ramirez has long been a part of the professional theater industry. He has worked as an actor, director, voice artist and voice and speech coach at theaters across the country including the Guthrie Theater, the Oregon Shakespeare Festival, Cleveland Playhouse, Hartford Stage, the Alley Theater and American Players Theatre, as well as numerous Shakespeare festivals in every region. He has been a member of the Recorded Books repertory company in New York City for over 20 years and is a proud member of Actors’ Equity Association. Robert served several years as a board member and vice president of the United Resident Theatre Association and is a member of the National Theatre Conference. He completed his undergraduate studies at the Los Angeles Theatre Academy at Los Angeles City College and earned his MFA at the University of Delaware’s Professional Theatre Training Program.

Over the past two years, in the wake of the pandemic and an industry-wide reckoning around racial inequities in the American theater, the School of Drama has worked to examine and reimagine how educational theater can and should contribute to a more equitable and sustainable field. Given his track record for changemaking at UT, and his rich experience as an artist and educator, Ramirez proved the right fit to lead the School of Drama into this new future.

“I’ve admired Robert’s leadership for years and could not be more delighted that he will be joining us at CMU. I’m absolutely convinced that he is the right person to take the School of Drama forward, in community and in this exact moment,” said Mary Ellen Poole, dean of the College of Fine Arts.

“I am, indeed, honored to join the School of Drama at Carnegie Mellon,” Ramirez said. “This is an opportunity to build upon the solid reputation and foundation that exist here among every discipline that contributes to the theater-making process and performance industry.”

The School of Drama extends heartfelt thanks to Anne Mundell. 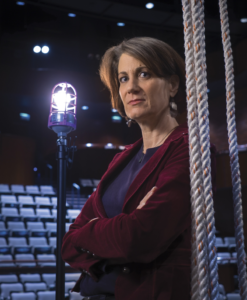 Since August of 2021, Anne Mundell, professor of scenic design, has led the School of Drama as interim head. Working alongside a steadfast leadership team comprised of Dick Block (associate head and teaching professor of design), Kyle Haden (senior associate head and assistant professor of acting), David Holcomb (associate head and director of production), and Amy Nichols (associate head and director of operations), Mundell spent her year as interim head laying the foundation for meaningful change within the School of Drama. She exercised vital leadership in changing the school’s culture of hiring, the results of which can be seen in an incredible roster of new faculty joining the school this fall. She also championed efforts to remove barriers for prospective students, making the admissions process more equitable and accessible. Her concern for the needs of students, faculty, and staff is genuine and drove everything she worked to accomplish.

“Stepping into this office, I could not be more grateful for Anne’s tremendous work as interim chair,” said Robert Ramirez, incoming head. “Her dedication to the school and its citizens is apparent at every turn.”

Dean Mary Ellen Poole said, “Anne has taught me a lot about being a leader. Her generosity with gratitude and her quick acknowledgement of people’s successes galvanized, and healed.”