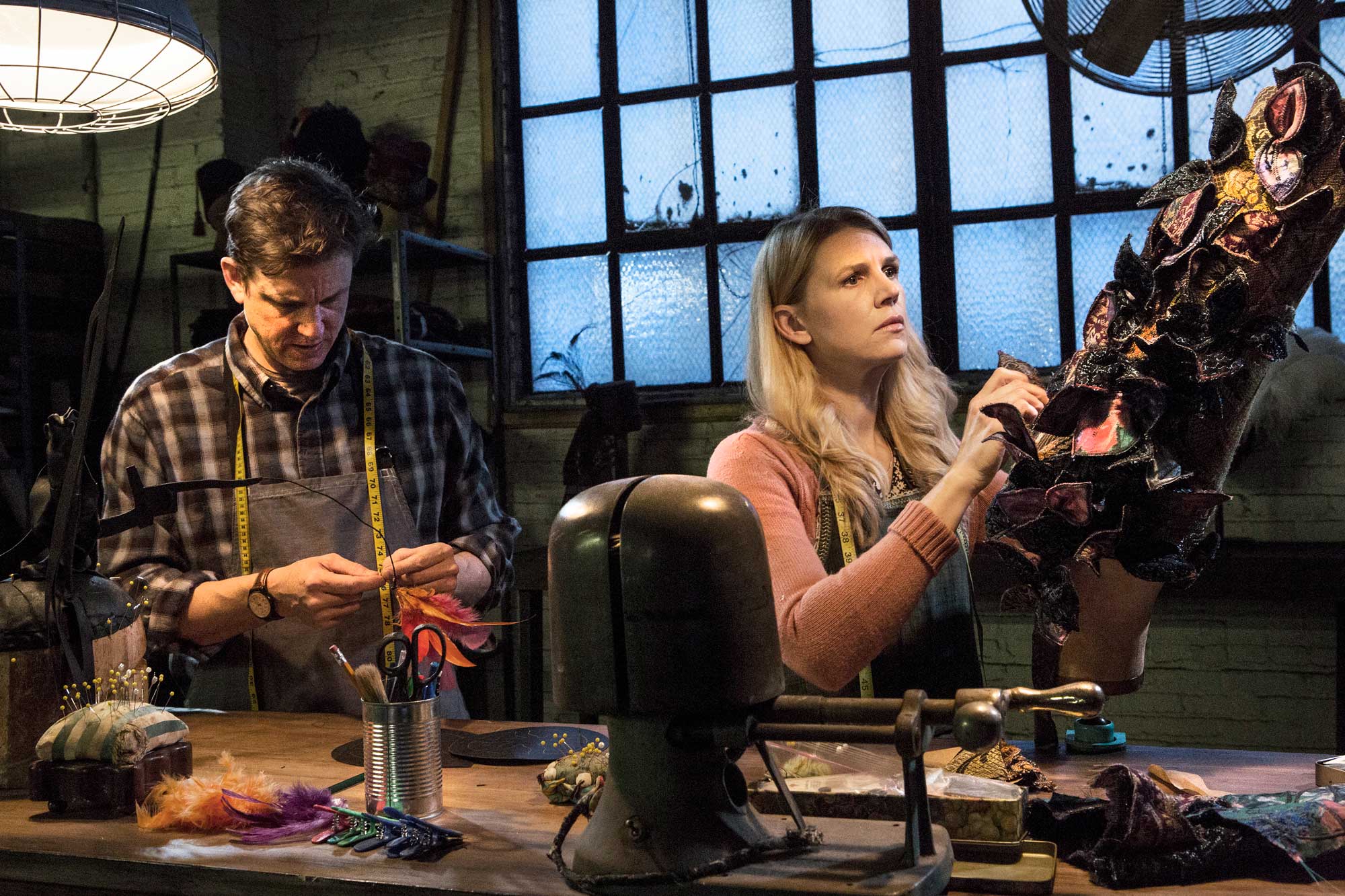 East Liberty-based Quantum Theatre’s upcoming production of Far Away by Caryl Churchill will showcase School of Drama faculty and students on both the talent and production side of things. However, with the ongoing pandemic, instead of being on stage, the production co-directed by founding Artistic Director Karla Boos and noted filmmaker Joe Seamans has been adapted for film and will stream online starting February 19.

Filmed in January between the fall and spring semester, Far Away features faculty members Lisa Velten-Smith as Joan and Andrew Smith as Todd. Rounding out the cast is Ingrid Sonnichsen as Joan’s Aunt Harper.

While only 45-minutes in length, the play is broken into 3 acts, with one week of production dedicated to each act.

“Each week would start off with three days of exploration and rehearsal.  The fourth day was for Karla Boos, Joe Seamans and Mark Knobil to plan their shots and the fifth and sixth days were our filming days,” said Velten-Smith.

Knobil serves as the production’s director of photography.

The work’s extraordinary costume design requirements are in the capable hands of Susan Tsu, professor of design, and a team of milliners from Pittsburgh and beyond, tasked with making hats that are a vital part of the piece. Mindy Eshelman, associate professor of costume design, and students Elyse Grimaldi (MFA ’22) and Jillian Warner (BFA ’23) lend their talents to the team as well.

Filming the production brought special considerations for the student designers whose craft focused on application for the stage.

“I had to consider what the set would look like from multiple angles and pay attention to details that would be captured in close-ups, instead of the traditional distance and the fourth wall that are standard in theaters,” said Garrett. “Color choices became important in ways I had never thought of before because of the way that the backgrounds interact with human skin tone on camera. Just picking out the wallpaper became a two-week process.”

Likewise, Asselin said she had to get used to the scrutinizing camera lens. “When we design for theatre and other live events, we’re designing for the human eye, which is generally a lot more forgiving than the camera. I had to spend some time balancing the intensity levels of each shot to create realistic and believable looks that set the tone for the first scene.”

Both Garrett and Asselin felt the lessons learned in Quantum’s production would carry into the School of Drama’s streaming productions this spring. Garrett is the scenic designer for HAIR, and Asselin is the lighting designer for Day Clothes.

While the pandemic continues to force theater companies to devise ways to continue telling stories, Quantum has shown that Pittsburgh remains a city ripe with opportunities for artists, faculty, and students to practice their craft.

“I’m a better educator when I do outside creative work,” said Pickett. “It keeps me up-to-date on what is going on in the industry and keeps my mind active. The school encourages its instructors to stay active in the profession to the extent that it has become part of our culture.”

Velten-Smith shared similar sentiments. “I’m grateful to be living in a city with artistic leadership that continues to provide opportunities for us to hone our craft while we guide the next generation of performers.”

Far Away will be available to stream on-demand from February 19 through March 7. Pay What You Want tickets are available on Quantum’s website, www.quantumtheatre.com/faraway, with a purchase granting 72 hours of access from the first viewing.